The Pilou copper mine, which is in the municipality of Poum, in the extreme north-west of Grande Terre, was worked from 1884 to 1931.  Having now been lain unmaintained for over 85 years, the impressive remains of the old mine can only be visited with a guide.

These firms mostly used convict labor. At one time in its history, the Pilou mine would be the only one in the territory to be entirely operated by convicts.

The mine was initially worked open face until 1885, when it was redeveloped after the discovery of a seam of copper of good quality by Louis Pelatan, a mining engineer. Thus the open face mining gave way to underground working through a steam-driven core-drilling system that allowed digging down to 212 meters below sea level.

The fall in copper prices finally lead to the permanent closure of the mine in 1931. Nowadays, one can still see the remains of chimneys, a vat, walls, ...

Discover the must-sees in Poum 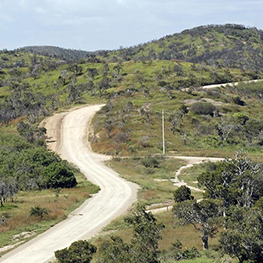