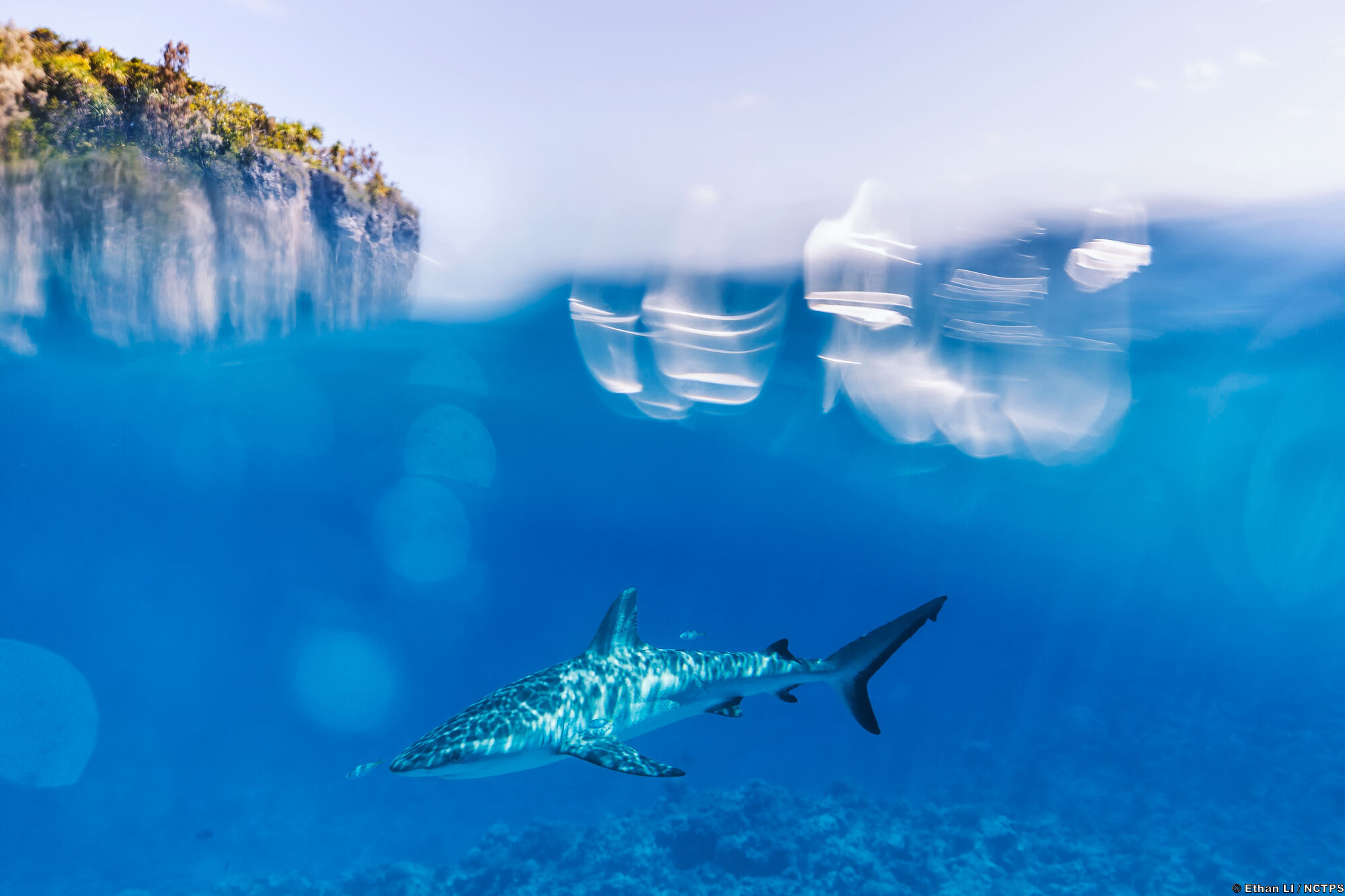 • Where and when is it safe to swim?

• Species protected in New Caledonia since 2013

• What types of sharks are found in New Caledonia?

As in many tropical travel destinations, humans and sharks coexist together in relative harmony in New Caledonia. Attacks do sometimes occur however, giving rise to legitimate concerns about the risks posed by sharks among swimmers and bathers. So is it actually dangerous to swim in the New Caledonian lagoon? Fatal attacks are rare, and when they do occur, it's very often a result of human actions or behaviour. The risk can therefore be largely reduced if a few common sense rules are applied. The challenge involved in preventing shark attacks in New Caledonia resides in the need to both protect and preserve the region's exceptional environment and at the same time keep tourist areas safe. To fully enjoy and get the most out of the experience of swimming in our beautiful lagoon, therefore, be sure to follow the advice provided in this guide!

Though 2021 seems to be a year marked by an increase in shark attacks in the waters around New Caledonia, looking at the number of incidents over time helps put the situation in perspective in terms of the world as a whole.

The research team at the National Museum of Natural History in Florida is doing remarkable work in counting and documenting all the known shark attacks that have occurred since 1580 up to the present day. Using the results they're providing us with, we can compare the situation in New Caledonia with other destinations famous for sharks. New Caledonia ranks 13th in the world for shark attacks, with just 17 recorded, far behind Australia's 670, South Africa's 256, Hawaii's 173, Papua New Guinea's 48, Reunion's 47 and the Fiji Islands' 23.

Though global pressure on the oceans appears to be pushing greater numbers of sharks to inhabit New Caledonia's lagoon (which is protected, thriving and teeming with life), it's important to note that in most of the attacks that have occurred in New Caledonia, risky human behaviour has been a factor (such as adopting attitudes that may frighten the sharks, put them in a position in which they feel the need to defend their territory, or cause them to simply confuse us with their usual prey).

💡Did you know? If you look at it in terms of the number of fatal shark incidents compared to the total number of sharks, you have only a 1 in 3.7 million chance of being attacked. The reality is that you're much more likely to die from being hit by a falling coconut… So be careful where you place your beach towel! 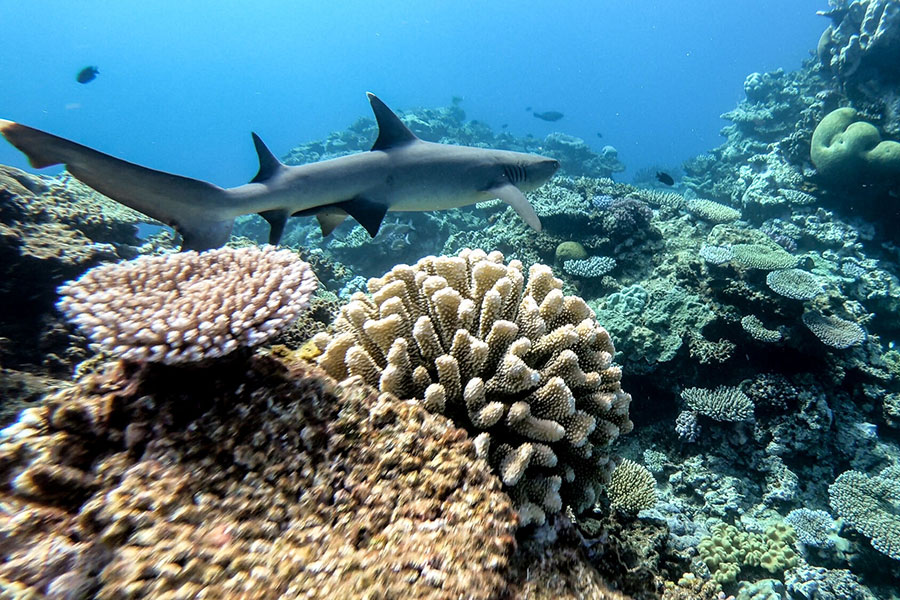 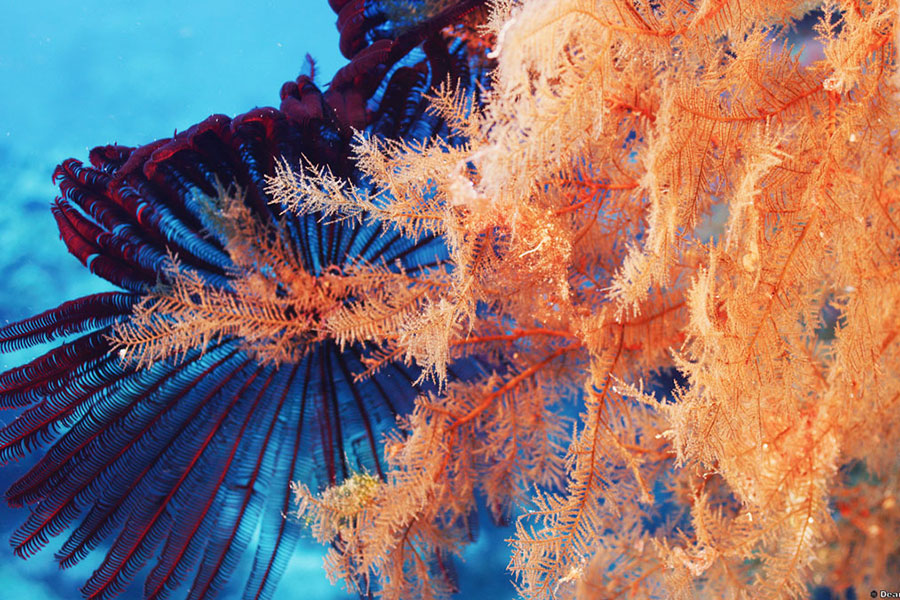 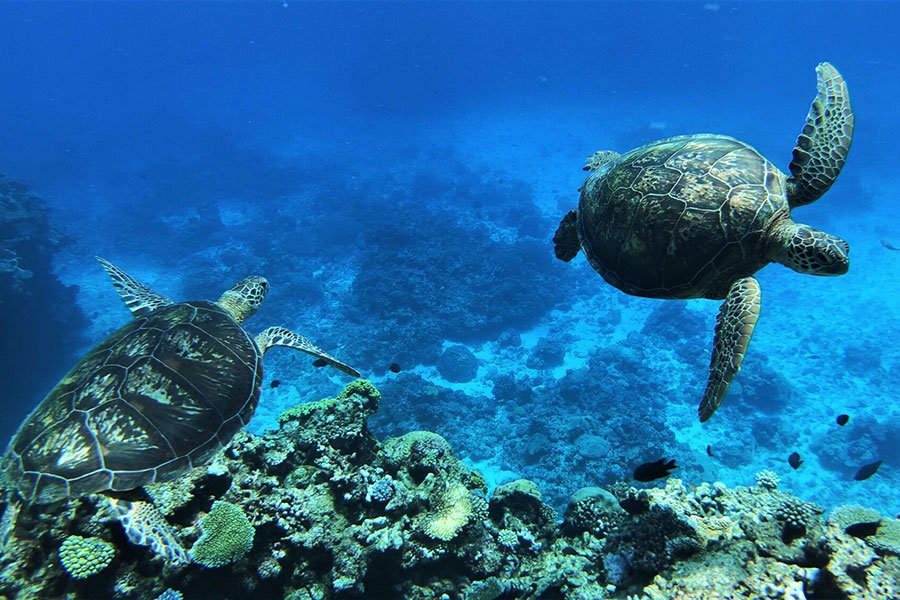 Where and when is it safe to swim?

From data collected about the situations in which shark attacks occur, we know that in the majority of cases, accidents occur when humans adopt risky behaviour in the presence of sharks. Safely coexisting with these creatures means following certain basic ground rules. In particular, it is a good idea to avoid areas where swimming is not recommended due to the threat of sharks, and to avoid venturing into the water at certain times of day.

Where to swim in New Caledonia

The authorities in New Caledonia monitor shark alerts closely, carry out regular patrols, and provide beach-goers with information about which beaches to avoid. Generally speaking, swimming is not recommended:

If you want even more safety, we recommend using the monitored beaches. These have a flag-based system in place:

The beaches of Baie des Citrons (Lemon Bay) and Anse Vata in Nouméa have lifeguards on duty each day from 9:30 am to 5:30 pm from December to the end of February, as well as during the school holidays in April, September and November and during all long holiday weekends outside these periods. 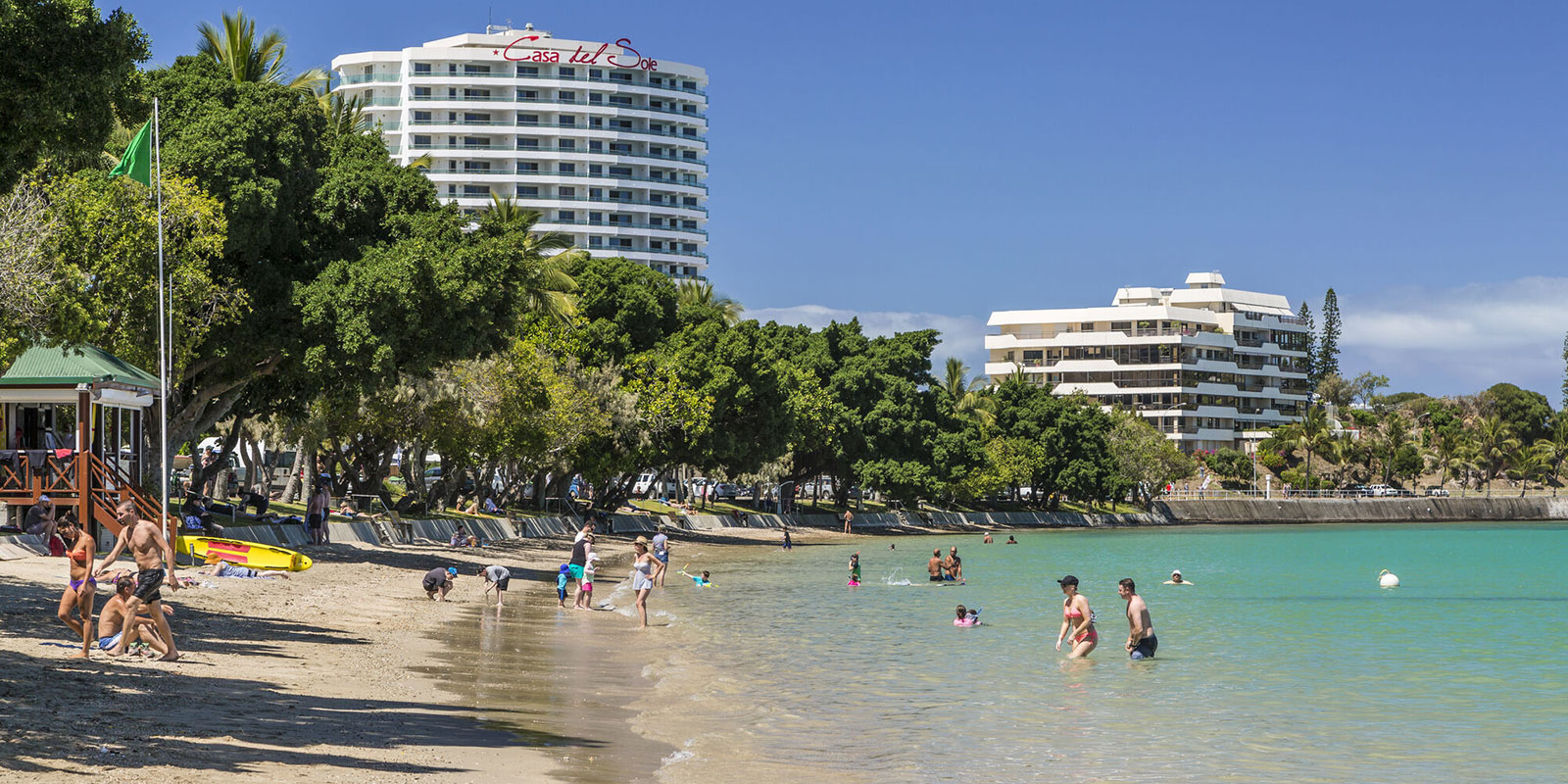 When should I avoid swimming?

In addition to the areas in which it's risky to swim, there are also certain times of day when the danger from sharks is elevated in New Caledonia. It is inadvisable to swim after periods of heavy rain (or other types of weather phenomena that agitate the water) and at nightfall or dawn.

How to react to a threatening shark

If you happen to come face to face with a shark, the first thing to do is stay calm and keep your eyes focussed firmly on it. Do not turn your back to it. If it tries to approach you, hold out a hard object (such as a snorkel, a mask or a flipper) and ensure it touches the shark. Once the shark detects the object is not edible, the chances are it will then leave.

Species protected in New Caledonia since 2013

Protecting biodiversity is ingrained in New Caledonia's regional DNA. Sharks play an important role in both Kanak traditions and the ecosystem. They have always been part of the Caledonian environment. People and sharks have to be able to live together in harmony here. As super predators, sharks have a low reproductive rate, making them particularly vulnerable and threatened throughout the world. Humans are also putting them in an increasingly fragile position due to the pressure exerted by fishing. It's for these reasons that sharks have been classified as protected species in New Caledonia since 2013. Fishing for sharks, transporting them, buying and selling them, cutting them into parts, keeping them, or consuming them in whole or in part are all prohibited.

The authorities have introduced various measures to keep local inhabitants and holidaymakers safe while at the same time protecting and preserving the species:

What types of sharks are found in New Caledonia??

Where New Caledonia is concerned, "shark" is in fact a broad and general term covering a wide and diverse range of specimens. Biologists have identified 49 different species of shark, many of which pose no danger to humans unless disturbed or interfered with. This is the case with most types of shark normally seen on snorkelling or scuba diving trips, particularly:

The movement of sharks in the lagoon is the subject of various studies conducted by local authorities and environmental organisations, and from these studies we are able to find out the main areas sharks inhabit and thus indicate their locations to sea users through the use of signs.

The largest specimens, such as mako sharks, tiger sharks, hammerhead sharks and great white sharks, are found further out to sea on the other side of the barrier reef and only rarely make incursions into the lagoon. Humans are not their natural prey, though a few attacks by tiger sharks have been recorded. Bull sharks require more vigilance, as some have made areas near the coast their regular habitat, and they have a tendency to be more aggressive towards humans.

By simply following these few recommendations, you'll be able to swim and bathe with complete peace of mind in New Caledonia. It would be a shame to miss out on the opportunity to enjoy the delights of our UNESCO World Heritage listed lagoon and its exceptional biodiversity! 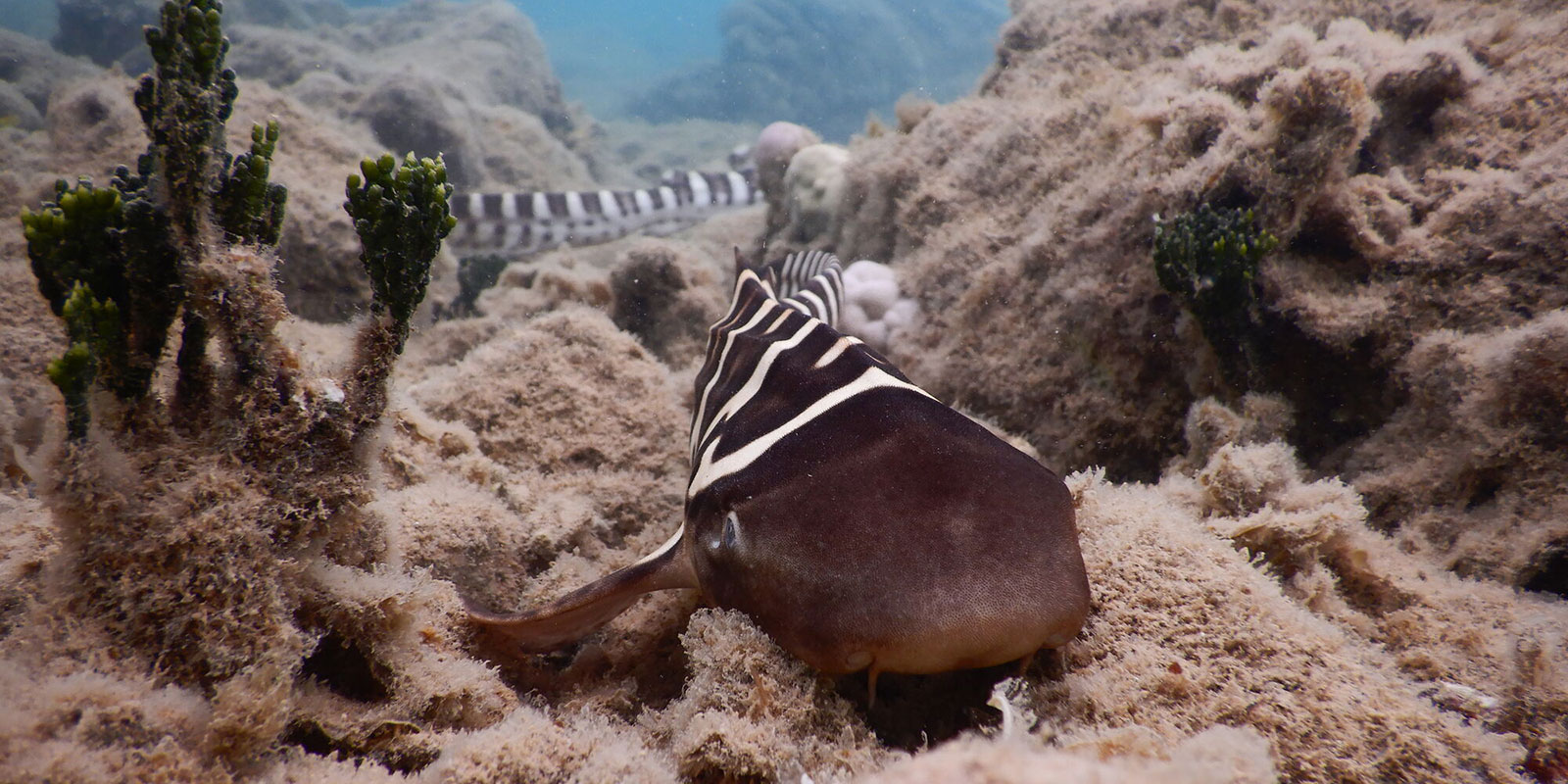