From 11 to 18 October, Italian chef Mirko Ronzoni, 2015 winner of the famous cooking programme “Hell’s Kitchen”, visited the territory to film his encounter with New Caledonian cuisine. 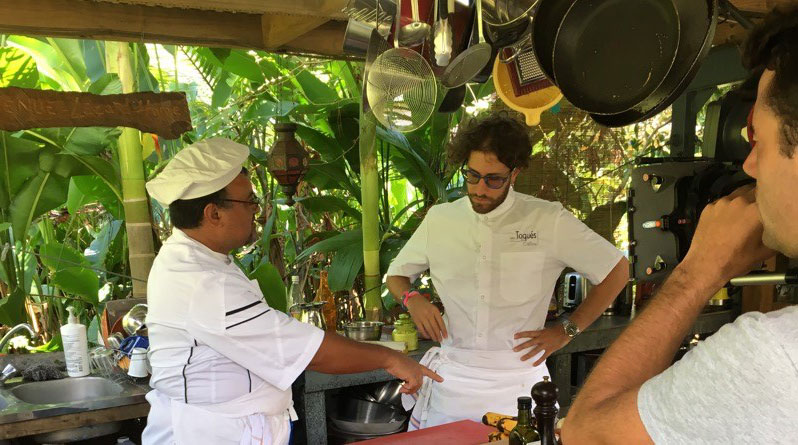 Filmed by local production company TETEMBA, Mirko Ronzoni experienced Le Taom restaurant (Château Royal hotel), l’Assiette du Cagou, Au p’tit Café and Le Reef restaurant (the Sheraton New Caledonia Deva Resort & Spa). He also took part in two cooking demonstrations. After shopping at the local Noumea Markets, the first was held at Lézard Home (guest house and table d’hôtes at Païta), with a chef from the Association des Toques (Chef’s Hat Association). This was then followed by a visit to a vanilla plantation. The second demonstration took place with chef Pascal Coulon at La Pirogue restaurant in le Méridien Isle of Pines hotel. In addition to seeing the capital’s restaurants and meetings with New Caledonian chefs, Mirko Ronzoni was also able to taste the renowned barbecued lobster in the Isle of Pines during a boat trip, as well as venison at Néméara Farm prior to helping with a cattle round up. As well as his culinary experiences, our Italian chef was also able to discover the splendours of the New Caledonian lagoon during a snorkelling trip in both the Isle of Pines and Noumea.

The aim of the visit was to appoint Mirko Ronzoni as the new Italian ambassador for the destination, following the example of Australan Justine Schofield in 2014. The popular Italian personality and the photos and videos taken during his visit will be used to promote the Territory throughout Italy.