Rarely has such a recent commune (Voh was established at the end of the 19th century) achieved such great world fame so suddenly. It took just one photo, signed by Yann Arthus-Bertrand, to put Voh on the map and win the hearts of most of humanity...

When the colonists came from the city to create the village, they set up a great many arabica coffee plantations. Until a cyclone destroyed the coffee plants, which were then definitively vanquished by a devastating drought. From this bygone age the coffee ecomuseum survives, nested in one of the village’s beautiful colonial houses.

From coffee to shrimp farming

Since then, the principally agricultural vocation of the commune has continued, but it has largely turned towards breeding. Not long ago, Voh also got into fish farming, and more specifically into shrimp farming (whose scientific name is peneiculture). One of the Northern Province’s two aquaculture farms can be found on the Gatope peninsula. It has greatly contributed to the renown of the Caledonian blue shrimp, so loved by our distant Japanese neighbours.

Also at the back of the Gatope beach, underneath the foliage, you can discover the last stone vestiges of a fort erected here in 1865, as a matter of fact the remains of a former powder keg. Not far from here, a commemorative plaque, attached to a white obelisk, is a reminder of the 1865 massacre of the crews of two ships by the Kanak inhabitants.

Voh’s heart has not stopped beating...

But the heart of Voh, with or without the play on words, beats above all in the commune's mangroves. This is where the photographer and journalist Yann Arthus-Bertrand took a snap of a natural curiosity in the shape of a heart, which spread across the planet when he decided to make it the cover of his book Earth from Above, a work which has sold many millions of copies. As such, the Heart of Voh has become the world symbol of a planet which must be preserved.

After gaining world renown in the 90s thanks to Yann Arthus-Bertrand's photo, Voh has taken centre stage once again with the construction of a huge metallurgy plant for the extraction of nickel. This precious mineral comes from the imposing Koniambo range, 20 km long, 12 km wide and 930 m high!

It seems a strange destiny that a natural plant formation should have developed in the heart of a mangrove, which is the case in Voh, in the north-west of ... 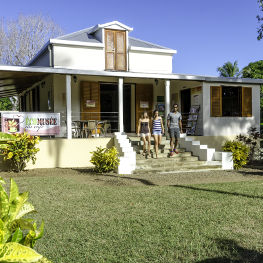 The Eco-Museum of Voh, located at the center of the village, reminds one that this municipality was a hot bed of coffee culture and production in the early... 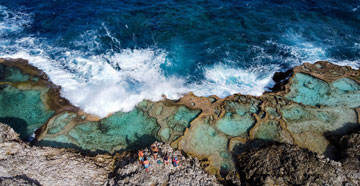 3 days to be steeped in new Caledonian culture