Our 6 globetrotters came from all 4 corners of the earth and once in New Caledonia, headed to Bourail in central Grande Terre, for the first stage of their adventure, which kicked off with an amazing night at the 5 * Sheraton Deva Resort & Spa.

After the arrival of Linda’s flight from New Zealand in the afternoon, followed by Monique’s flight from Australia at about 8 pm, the pair had to wait until the other four 'Caledodreamers' - Ethan (China), Ayako (Japan), Dario (Italy) and Marion (France) - arrived in Tokyo before boarding an Aircalin flight (the local airline) to tackle the final leg to New Caledonia.

Everyone was surprised and delighted to find a friendly, rhythmic welcome by the We Ce Ca music group, who were resplendent in their traditional Kanak dress and waiting for them in La Tontouta Airport’s arrivals lounge. They had just enough time to take a few snaps before heading into the night for a 2-hour drive to the commune of Bourail, a broussard stronghold located on Grande Terre’s west coast. 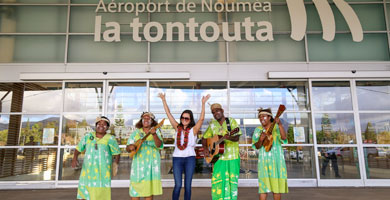 While they got to know each other and chatted about what they expected from the trip, Linda enjoyed a culinary preview by tucking into the Sheraton New Caledonia Deva Spa & Golf Resort’s delicious buffet, laden with French specialities (wines, cheeses, gratin Dauphinois) and local Caledonian dishes (deer stew, fish salad).

You can imagine the excitement of our 6 travellers when they set sight on this 5-star hotel, with its array of stunning bungalows nestled in the heart of the magnificent Domaine de Deva! But before exploring the area’s 8,000 hectares of biodiverse lagoon meets mountain landscape, our adventurers settled down to a well-earned good night’s sleep.

As Linda says, they were both exhausted by the journey and excited about what was to come: 'A bit of rest will do us good, because we want to be in shape if we’re to explore the surroundings. The night may have darkened the horizon, but we can already smell the lagoon’s salty waters and hear the gentle sound of waves washing up on the beach close to our rooms.'  All you need to have your first beautiful Calendonian dream!