The village of Moindou is located less than 130 kilometers from Nouméa. Its origins are closely linked to the penitentiary center of Bourail, leaving a strong heritage behind. Boasting generous, protected nature, Moindou offers the possibility of great hiking. The beach at Tanguy is also a must-see!

The poor anchoring conditions at the mouth of the Néra in Bourail led authorities at the time to look for a more sheltered port. The site at Mouidou (or Moindou in the Kanak language) was chosen in 1871.

If one building could sum up the Moindou’s notoriety, it would of course ben Fort-Teremba. As the most imposing military colonial vestige in New Caledonia, it has undergone constant renovation to match the colonial military at the turn of the 20th century. A sound and light show attracting thousands of spectators is also held every year on the citadel overlooking the sea.

Moindou is also well-known for its exceptional palm forest, especially the famous royal palms that are now the town’s pride. Imported from Cuba by a colonist originally from Réunion, Casimir Boyer, they are especially visible in the Garden of the Future, neat the chapel (which itself was constructed in 1947).

Industrial heritage isn’t just the royal palms. After tobacco growing came coal fever after the discovery of coal seams. This would last about ten years, but would leave important vestiges behind, like the Médouya factory on the mining site called “Audaces Fortunat Juva (literally “Fortune smiles upon the bold”).

The historic inn at Moindou (formerly known as Hotel Bray) still has traces of the road stop-over it used to be on the colonial Route 1 (which has since become a territorial road).

Collective Caledonian memory continues to associate Moindou with the arrival of immigrants from Alsace and Lorraine. In reality, barely a dozen settled in the village in 1873. Still, they left real traces that can be found in some place names. Bechtel Bridge, the Eschenbrenner coal seam (named after the family that also owned Château Beaumont) and Muller Marsh also keeps the memory alive of these pioneers of free colonization. 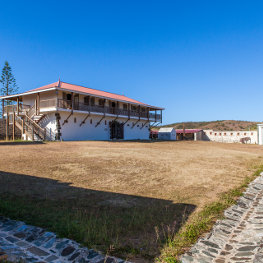 What to do in Moindou?

You’ll need about 1 driving in an SUV on a narrow trail through the mountains to reach the magic of the Table Unio tribal site. With its majestic peaks, its rivers and water holes, the splendid natural setting of Table Unio is an invitation for relaxation and discover. Walks, hikes in addition to braiding workshops are offered by the tribe to visitors. Note that every 3rd weekend of the month, a livestock market is held.

The sea at the village of Moindou is still notable, with the very beautiful beach at Tanghy, whose wild appearance is particularly appreciated by nature-lovers.