In keeping with its digital strategy, New Caledonia Tourism (NCT) previewed its totally new 360° Virtual Reality (VR) competition on 24 November in Paris, during the sixth “Verre du Voyageur” (“Travellers Drinks”)evening, organised by Bruno Maltor, creator of the Votre Tour du Monde blog and “ambassador” for New Caledonia in France. The influencer was really taken with the New Caledonian archipelago during his visit in December 2015 and the video of his trip went viral, with 1.5 million visits on just his Facebook page alone: “Never in my experience have I seen such a buzz created for a destination featured on social networks and I’m delighted to have been involved in highlighting this region which really deserves to be discovered” he said. So it was only normal that NCT, Verre du Voyageur partner, should take this great opportunity to launch its very first French, interactive competition in front of 1,360 travel enthusiasts. During the evening, the participants were able to try the Virtual Reality headset, watch the 360° videos and be instantly transported into the South Pacific archipelago! This event, which fits perfectly into NCT’s digital strategy, was able to highlight the destination and to promote its tourist activities to hundreds of digitally-aware visitors who could enjoy the interactive and immersive experience.

Released five weeks ago onto the New Caledonia Facebook page Nouvelle-Calédonie and the www.nouvellecaledonie.travel website, on screens (VR headphones, smartphones or computers), the gaming app plunges the internet user into a range of sites within New Caledonia. By using three steps, there is a chance to win points which could lead to being in the final draw. The winner will receive an all-inclusive trip to New Caledonia for two, with flights offered by Aircalin.
Using this new and innovative initiative enables the destination to experiment with a with a new style of cultural and tourist development, based on immersive storytelling technology. 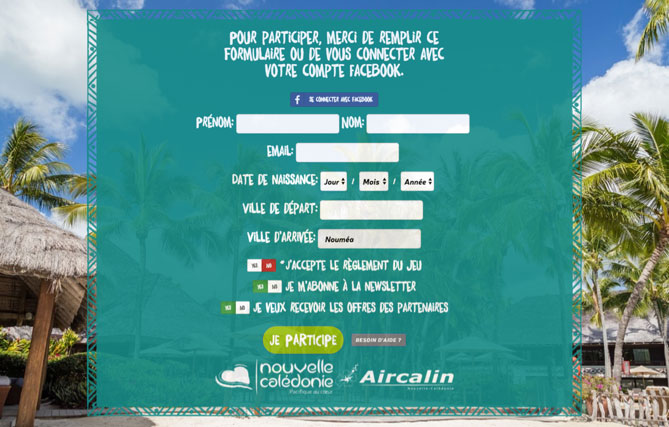