In 2017, for the first time, New Caledonia Tourism is using one single international advertising campaign to promote its tourism. Before Tokyo, London, Geneva and elsewhere, it begins, from 23 December to 30 April 2017, with a major poster campaign in Paris. The slogan “Just a slight change of scenery…” features on the backs of the buses circulating around the capital, catching the attention of Parisians and creating a desire to get away in the middle of winter! 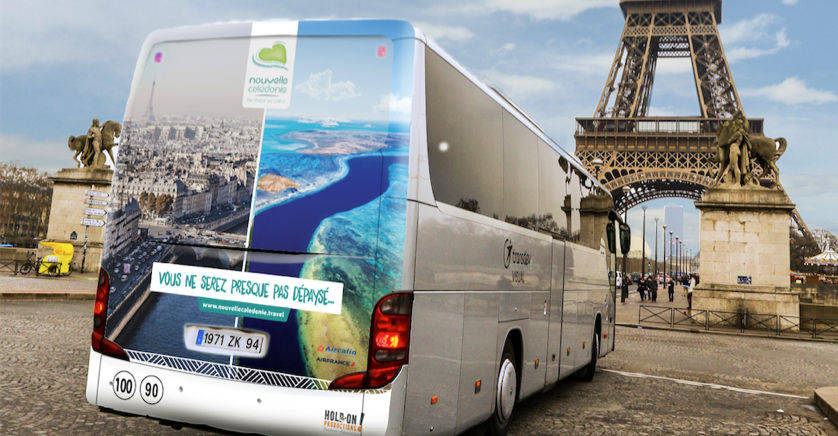 Coordinated by New Caledonia Tourism (Nouvelle-Calédonie Tourisme) and their local communications agency Coup d’Ouest, the objective of this new campaign, which started in Paris on December 23, is to catch the attention of the Metropolitan French market by using striking visuals and an intriguing slogan, in order to position New Caledonia as a future, not-to-be-missed destination. The aim is to strengthen the archipelago’s appeal and reputation by setting itself apart from the traditional means of advertising used by its competitors.

The visuals juxtapose everyday city scenes with those of the New Caledonian scenery, blending them together to form one single landscape. A stance comparing everyday urban cityscapes with the grandiose scenery to be found in New Caledonia. The slogan “Just a slight change of scenery…” highlights this contrast, using humour to catch the attention of the city-dwellers.

The campaign won’t just be limited to Paris – in January it will take off on Swiss tourist buses and mountain trams before landing in London and Berlin. A poster campaign reaching out directly to potential tourists will be progressively complemented by other means of communication (web ads, press releases, posters, events etc.) throughout all of New Caledonia’s target markets: Germany, Italy, the UK, Switzerland, Japan, Australia, New Zealand and elsewhere. The strength of this concept is that the strong points of the destination can be adapted to the expectations of each market: an authentic archipelago far from mass tourism; a diversity of unspoilt landscapes; a mosaic of cultural influences; a wide range of activities, etc.

Finally, apart from raising awareness of the destination, which is the driving force behind this visual campaign, New Caledonia Tourism is also developing a complementary tactical campaign, in conjunction with the airlines – Aircalin and Air France – and Tour Operators, who will stimulate sales more directly by offering special promotions.

According to Julie Laronde, Deputy Manager of New Caledonia Tourism:

« This new campaign underlines the desire of New Caledonia to set itself apart as a destination, by highlighting the strengths of its scenery and special cultural characteristics. The images of untouched beauty speak for themselves, transporting the potential tourists away from their everyday life. The aim is also to grow the current tourism market to New Caledonia by making a striking impression and showing to the Metropolitan French (and indeed all other foreign tourists) the beauty and appeal of this French territory located at the other end of the world. Furthermore, by initiating a multi-market approach, using the same message but adapted to the requirements of each market, we can concentrate our methods of communication for a much more significant impact! »