At the very first Tourism and Cultural Video Awards, organised as part of the Multimedia Travel Show in Cannes, New Caledonia Tourism took out the Grand Prix #VEM for Best Video of a Tourist Destination with the clip “Where does the suitcase come from?”. 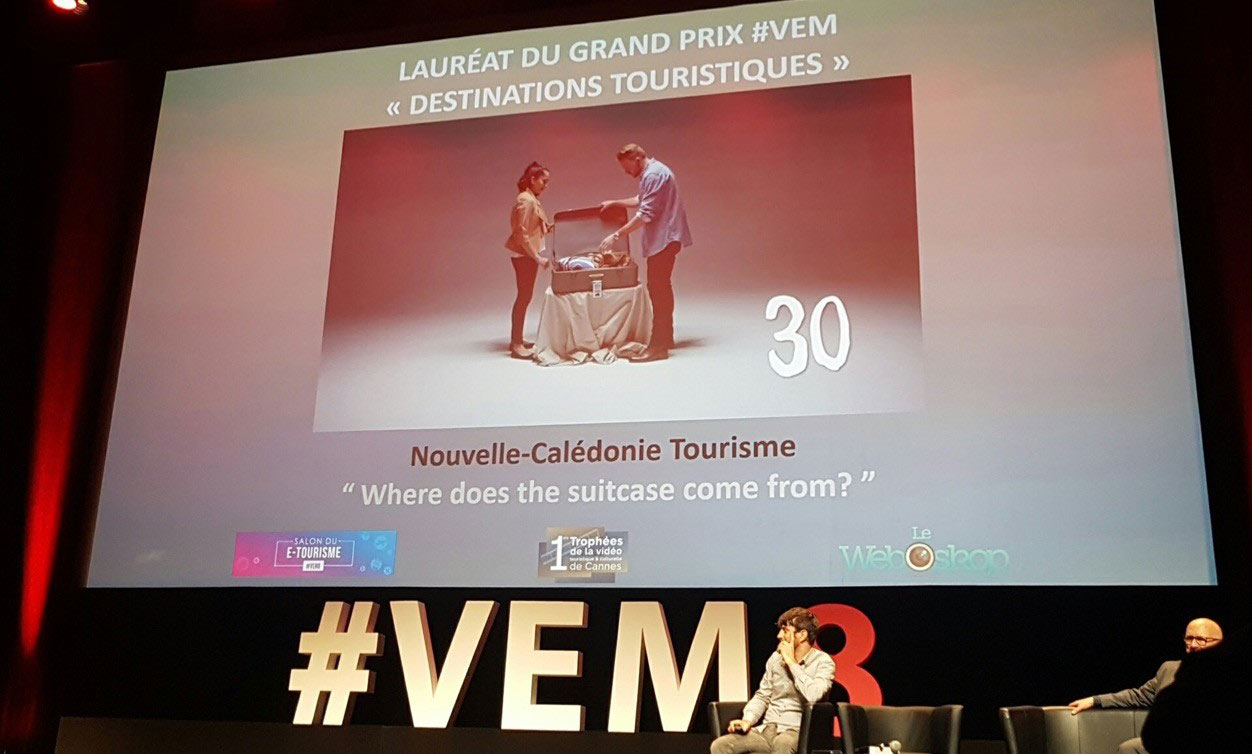 The organisers of the 2016 annual Multimedia Travel Show, held in Cannes at the Palais des Festivals, decided to be innovated and launched the inaugural Tourist and Cultural Video Awards.  Designed to highlight the creativity and originality within the tourist and cultural promotion sector, these Awards are to reward the best video productions in 4 different categories. New Caledonia Tourism was nominated in the “Best Touri st Destination Video” category, out of 141 candidates, alongside Jura & Trois-Lacs (Switzerland), Berry Province and Emilia Romagna Turismo (Italy). The judges, made up of video production, culture and tourism experts, including Sébastien Aubert, Producer AD ASTRA FILM, Grégoire Chartron, Author of the LeWeboskop blog, René Corbier, Artistic Director Scène 55 and Bruno Maltor, Voyage blogger, awarded the Grand Prix #VEM for the Best Tourist Destination Video to New Caledonia for its original, creative video.

“Where does the suitcase come from?”

What does a bottle of champagne, a cowboy hat and a snorkel have in common? This is the challenge thrown down to a group of Australians and New Zealanders through this video created by New Caledonia Tourism Australia.  For the chance to win 2 tickets to the mystery destination, the video’s group of strangers have 30 seconds to guess the destination by examining the contents of the suitcase.

With more than 340,000 views on You Tube, the video has been particularly well-received by the Australian and New Zealand public, as it accompanied the virtual reality campaign launch to all of the New Caledonia Tourism markets: http://www.youtube.com/watch?v=gYFdYXiYauw&feature=youtu.be

According to Caroline Brunel, NCT Australia/New Zealand Account Manager, “this video captured the imagination of potential visitors from these markets. New Caledonia, like many competitor destinations, has magnificent landscapes and unique experiences; however, the question was how to stand out in an overly congested media environment? We wanted to work, above all, on the preconceived ideas of the destination by the Australian and New Zealand markets but also to subtly launch our campaign and the virtual reality application”.

Martine Lagneau, President of New Caledonia Tourism, said, “We are delighted to have received this award, which recognises the creativity and originality of New Caledonia Tourism in promoting the destination’s tourist attractions. The clip, specially created for the Australian and New Zealand markets, is part of the innovative and digital campaign launched on internationally. We have developed a new virtual reality app with some fifteen 360° videos, which gives the user an immersive experience in discovering the destination. We are continuing investing in promoting the archipelago by putting in place fun and quirky initiatives, such as the recent humorous and very different poster campaign “Just a slight change of scenery…” launched in Paris last December.”

For the first time, an extensive international, multichannel marketing campaign was launched last December to promote tourism to New Caledonia. It began with a major poster campaign in Paris before London, Geneva, Berlin, Tokyo and elsewhere. Co-ordinated by New Caledonia Tourism and its local marketing agency Coup d’Ouest, the message “Just a slight change of scenery…” features on the backs of the buses circulating around the capital, catching the attention of Parisians and creating a desire to get away in the middle of winter…

Over 20,000km from mainland France, New Caledonia is a French Territory located in the heart of the Pacific Ocean, east of Australia. The South Pacific archipelago is made up of a Main Island, 450kms long, surrounded by the Loyalty Islands to the east (Ouvéa, Lifou and Maré), the Bélep archipelago to the north and the Isle of Pines to the south. Protected from the ocean by an immense coral barrier reef, New Caledonia has the largest lagoon in the world, registered as a World Heritage Site by UNESCO in July 2008. The island is ranked fifth in the world for its biological wealth.