Following on from a record year in 2015, the number of tourists visiting New Caledonia in 2016 reached 115,676, an increase of 1.5%. In a gloomy economic climate, the New Caledonian tourist sector is showing healthy growth in its priority and geographically-close markets: Australia, New Zealand and Japan. 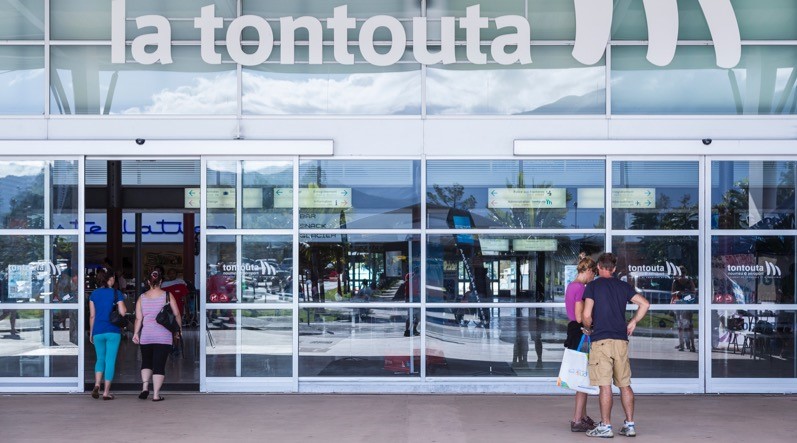 New Caledonia tourism has now experienced two years of consecutive growth!  It’s an indication that the sector is on the rebound, with 115,676 tourists visiting New Caledonia in 2016, an increase of 1.5% over 2015 according to ISEE (the Institute of Statistics and Economic Studies).

This growth can be explained above all by the continued increase which started in 2014, of Australian leisure market visitors (+9% increase in 2016), Japanese (+5.5%) and New Zealand (+7.2%), the three priority markets targeted by New Caledonia Tourism and its partners. In addition, visitor numbers from Metropolitan France stabilised (within the economic crisis context, the decrease was only -1.4% in 2016). As an adjunct, only the secondary markets, which did not receive any promotional campaigns on the part of the New Caledonian tourist industry, showed a decline (USA/Canada and the Pacific Islands dropped -33,6% and -5,8% respectively in 2016).

NCTPS, representing the South Province, works in collaboration with the local tourism industry (North Province Tourism, Destination Loyalty Islands, Aircalin, the hotels, inbound receptive agencies, etc) to ensure international promotion of the destination, primarily aimed at Australia/New Zealand, Japan and Metropolitan France, identified by market studies as the most promising target markets and in which overseas representation is based. In 2016, the NCTPS range of initiatives were most notably those mentioned below. 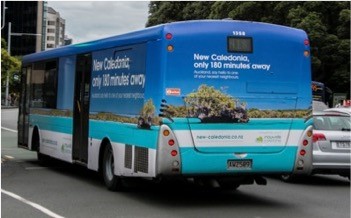 In order to attract potential tourists, increased exposure and awareness of New Caledonia is needed. For this reason, NCTPS launched major, multi-channel marketing campaigns aimed at the general public, together with a wide-ranging public relations programme involving overseas media (196 TV/Print/Web journalists were invited in 2016).  As an example, the “Meet your Neighbours” campaign with a major poster campaign (bus and airport networks) and web marketing, significantly raised awareness in Australia and New Zealand of the destination’s proximity.  The same applied to the” Nouvelle-Calédonie, Nouvelle Dimension” (New Caledonia, New Dimension) campaign, designed to reach the Metropolitan French market directly in their subways and on their smartphones, and the “Off Peak” promotion in Japan, aiming to grow sales in the low season using attractive packages and “value adds”. For each of these, NCTPS closely linked awareness and tactical campaigns which highlighted promotions by tour operators and airlines (Aircalin) to boost sales. 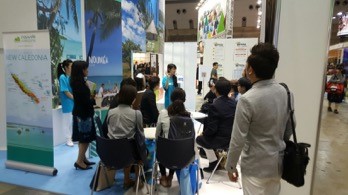 To persuade the overseas tourism professionals (tour operators and travel agents) to sell the destination, in 2016, NCTPS (with the support of the local tourism plant) invited 169 of these professionals to participate in familiarization trips, in order to discover the range of tourism on offer in New Caledonia and to promote it through their range of networks. An e-learning programme then completed the initiative, strengthening participants’ links (and those of their colleagues’) with the destination.  NCTPS were present at a large number of roadshows and trade shows, such as JATA in Japan, IFTM in France, ITB Berlin in Germany, AIME in Australia,  meeting with professionals face-to-face and using these  hundreds of meetings to create sales opportunities.

This year, digital initiatives by NCTPS have taken a huge leap forward with its new, ambitious website in French, English and Japanese, which will become the single international portal for the destination.  Suggestions on visiting, information on events, details of tourist providers and more.  Launched in September 2016, www.newcaledonia.travel provides a complete, interactive and practical view of the entire destination, emphasising its incredible touristic wealth. Complementing this reference tool, NCTPS is increasingly present on social networks through its comprehensive community management programme (162,623 Facebook followers throughout the world in 2016, an increase of +209% in under two years).  Finally, NCTPS has made an impression in a totally original way and given a dynamic image of the destination, by using virtual reality with 360° videos of New Caledonia. Cutting-edge technology which immerses both tourists and overseas travel agents alike in the country’s iconic sites.

All these initiatives have a tangible impact on tourist growth, both in the short and the long term.  For this reason, New Caledonia Tourism is acting in long term tourism promotion by bringing together the key local public and private tourism players. While they have been working together under the same international brand of “New Caledonia, Pacific Heart” since 2010, they have adopted a new, digital-led strategy and a complete restructuration of international representation in order to widen their reach. At the end of 2013, a new, concerted management method was also introduced, under the name of “Destination contracts”.  All the sector’s key players (the three provision tourist offices, the New Caledonia government, airlines, hotels and inbound receptive agencies) established an agreed objective for visitor numbers and the methods to reach this target. They now hold monthly meetings which coordinate and maximise initiatives in each target market (working with the tour operators to ensure better communication, airline capacity and cooperative campaigns).  The local tourist operators also work within the framework of the “Tourism Workshops”, held under the auspices of the South Province and New Caledonian institutions, thus ensuring an integrated transformation of the sector into the true tourist industry which is required for the future. A new tourist development plan has emerged, in which tourism promotion will continue and be strengthened, in order to achieve the fixed objective of 200,000 tourists and 1,200,000 cruise ship passengers by 2015.

Given that each tourist brings an average of 199,000 XPF[1] to the economy, this new record is undoubtedly good news for the territory.