When most people think of Fly fishing they generally picture beautiful rivers and streams in Scotland, Tasmania or New Zealand, with anglers delicately casting dry fly imitations to surface-sipping fish such as Brown Trout. It’s a very visual attraction, with the angler first sighting the fish, working out what insect or stage of the hatch the fish is feeding on and then trying to fool them into eating a well-presented insect or fly imitation.

Since the emergence of freshwater Fly fishing in the United Kingdom in the 1600’s,  Salt-water Fly fishing is now also a huge sport globally, with thousands of anglers traveling around the world to target a variety of species including those found in tropical and exotic locations, often while escaping the winters back home. And New Caledonia is no exception! 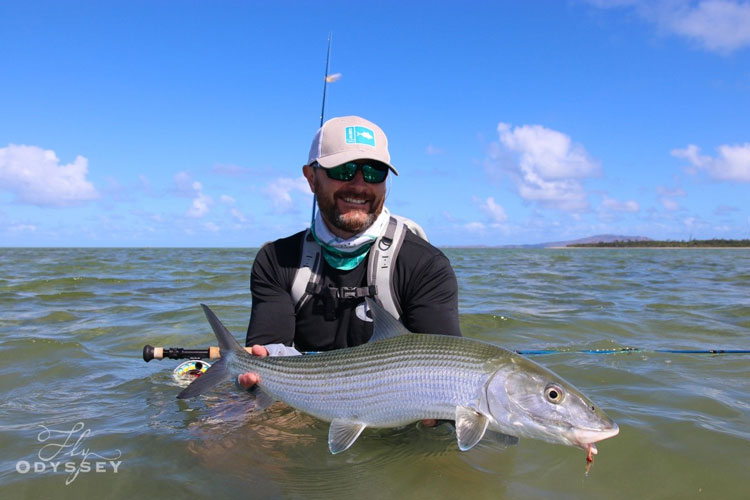 The number one saltwater fly species fishermen travel to catch internationally is the Bonefish (above) and New Caledonia arguably has some of the biggest Bonefish found anywhere in the world. With this in mind, we recently packed the bags and the rods and embarked on a self-drive tour of New Caledonia, to chase some of the trophy sized Bonefish swimming in its waters! 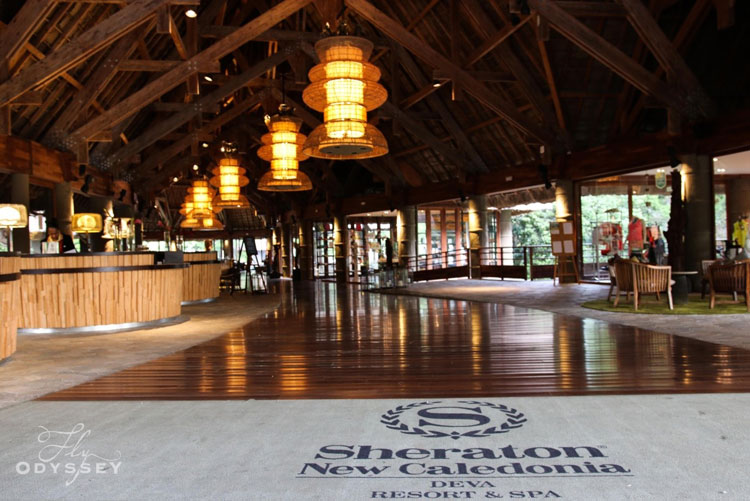 Flying direct on a short 3 ½ hour flight from Melbourne courtesy of Air Calin, we arrived at La Tontouta International Airport, grabbed a hire car and travelled 2 hours north to Bourail checking in at the Sheraton Deva Resort and Spa. 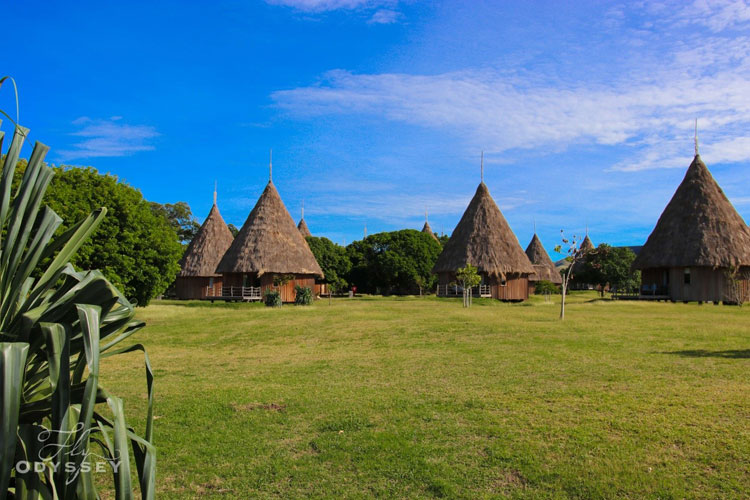 The following morning, we heading north up the west coast through Poya, Kone and Koumac taking in the ever-changing landscape of green valleys, hills and coastal scenery which was fascinating. With small villages and towns in between we were greeted with friendly waves by the locals, and a few wild horses by the side of the road before arriving at the very tip of New Caledonia at the Relais de Poingam which would be our base for a few days.

The 'Resort of Poingam' is a locally owned and operated bungalow setting with charming hosts, offering a relaxing French/South Seas style right on the beach. Located four hundred and fifty kilometres from Noumea, Poingam is a little paradise located near Boat Pass with beautiful beaches, offering seven rustic thatched bungalows with quaint attached outdoor bathrooms. The beautiful garden surroundings and the feeling that you are literally at the end of the earth make this a fantastic getaway from the fast-paced world that many of us are accustomed to. 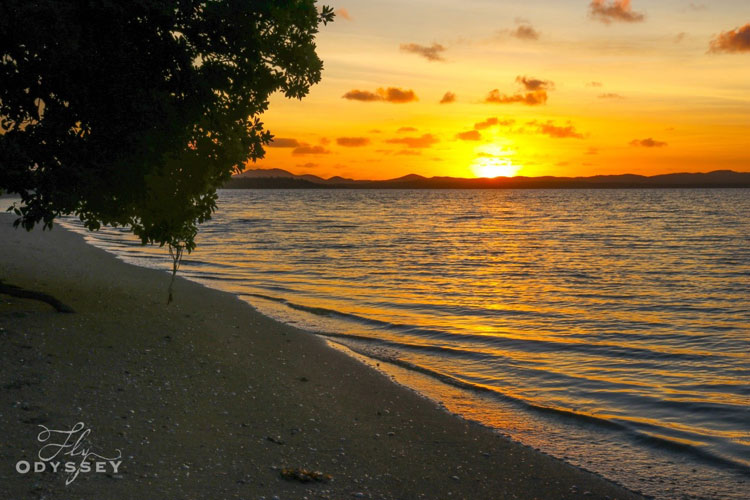 Over the next four days we joined our local Kanak fly fishing guide and ventured along the coastline fishing a number of vast sand-flats in pursuit of Bonefish, timing our visit to coincide with the best fishing tides and conditions. 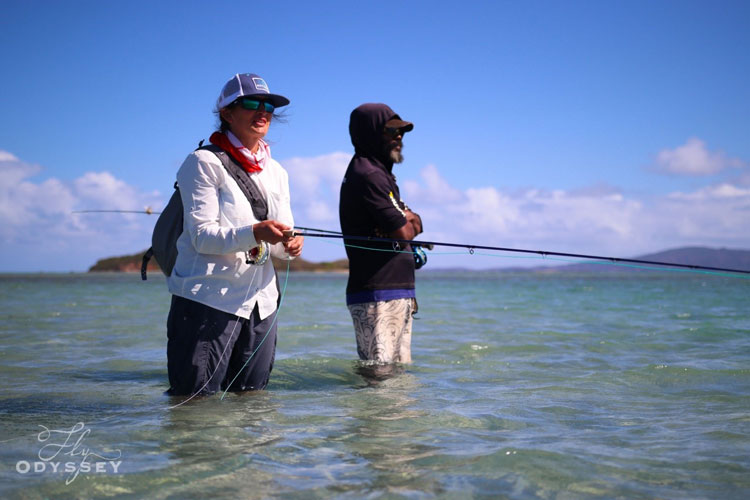 Bonefish are a challenge to catch as they move from deeper water onto shallow sand-flats to feed in gin-clear water, often fooled with well-presented shrimp or crab-fly imitations and fleeting retrieval. Once hooked however they take off on powerful explosive long runs, peeling off a hundred meters of line in seconds which can be exhilarating. 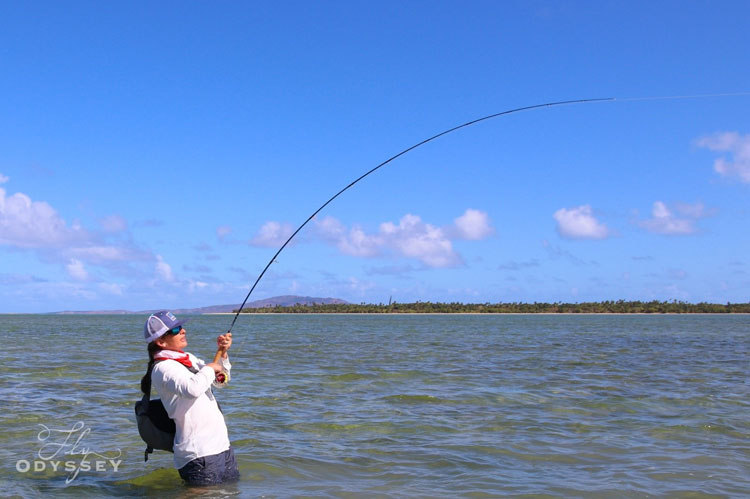 We had a great few days exploring different flat systems, mangrove creeks and deserted islands with not another person in sight with a perfect temperature of around 25 degrees and light winds. We also saw a variety of corals, turtles, reef sharks and schools of baitfish while also taking the time to swim and relax in the beautiful surroundings. 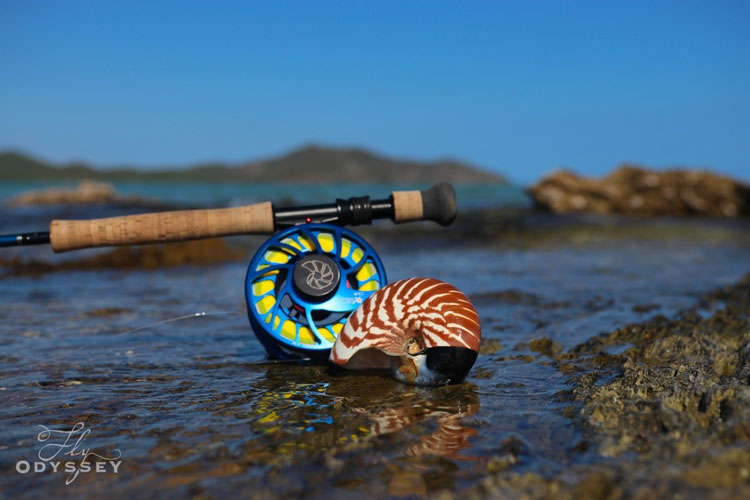 Once we located the fish, we had some outstanding Bonefishing with several trophy sized fish over ten pounds landed and released, which tested our gear to the limits and made for a very action-packed first few days on the flats. The power and average size of these Bonefish were larger than any we have encountered throughout the South Pacific and were certainly worth the journey alone. 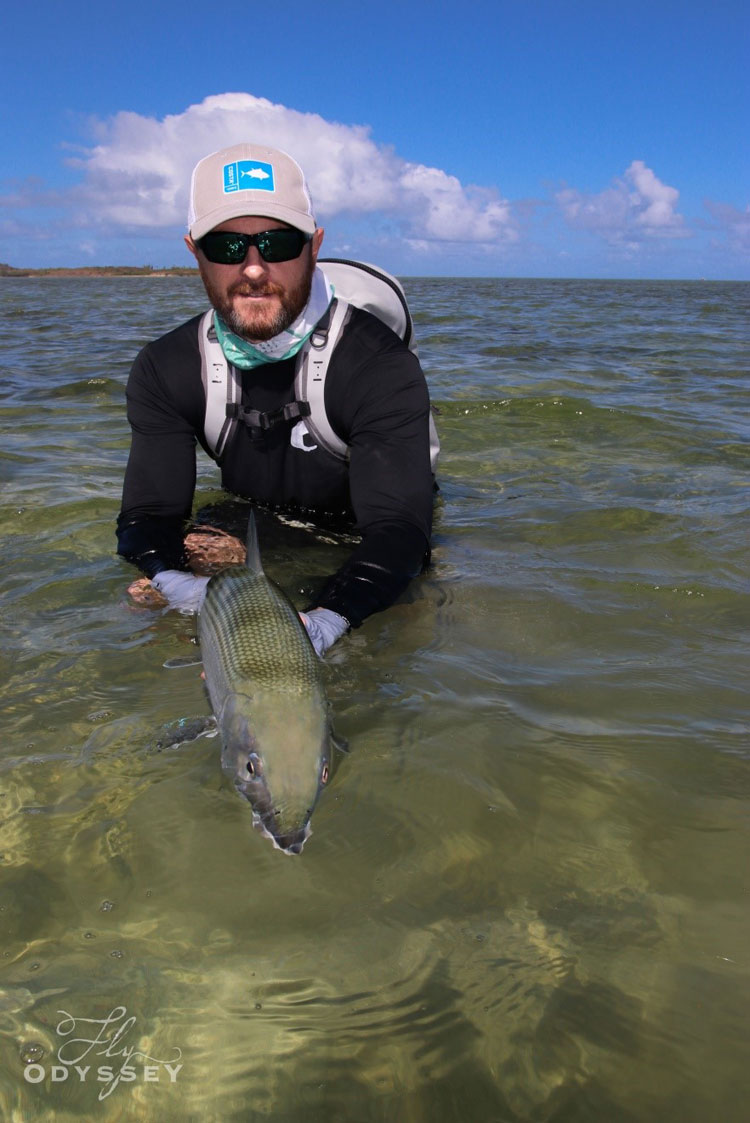 Returning in the afternoons to the Relais de Poingam, we dined each evening at a large communal table where we shared our evening meal and wine over three courses with travellers from all over the world. The setting made for a few great nights where we also planned our assault on the bonefish flats the following day. 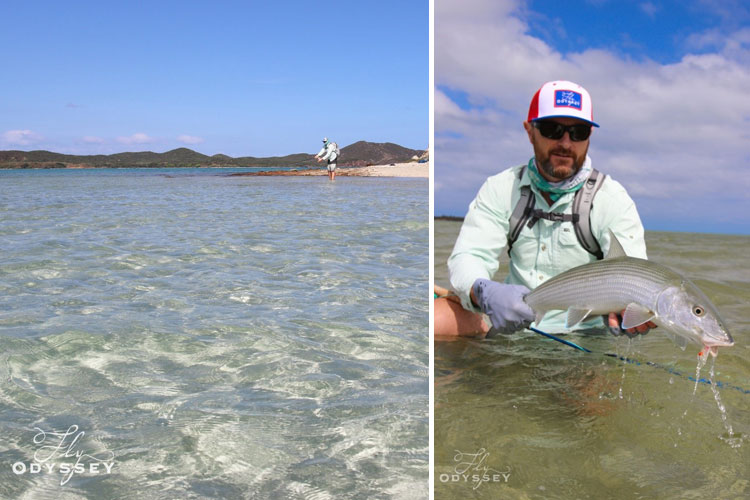 We finished the Fly fishing component of our trip after some outstanding world class fly fishing and then packed our bags and continued with excitement across the central mountain ranges, to the spectacular North-east coast as we made our way to Poindimie. 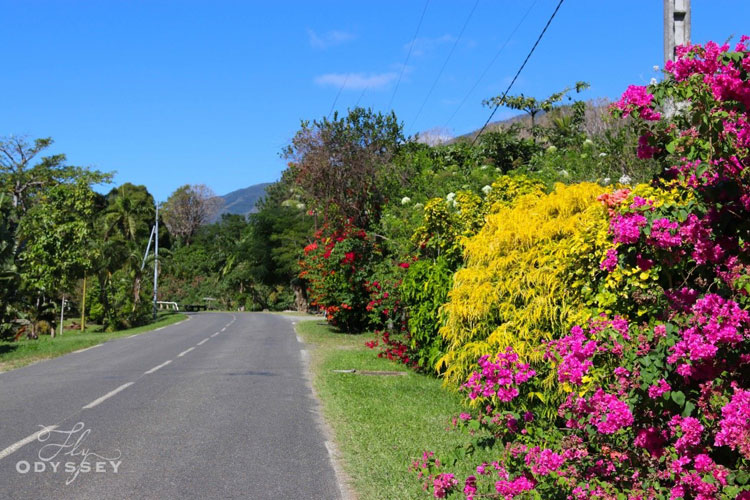 The coastal road has to be one of the most remote, scenic drives in the world with stunning waterfalls, beaches and the Mt.Panie mountain range which extends to an elevation of 1630m inland from the ocean. 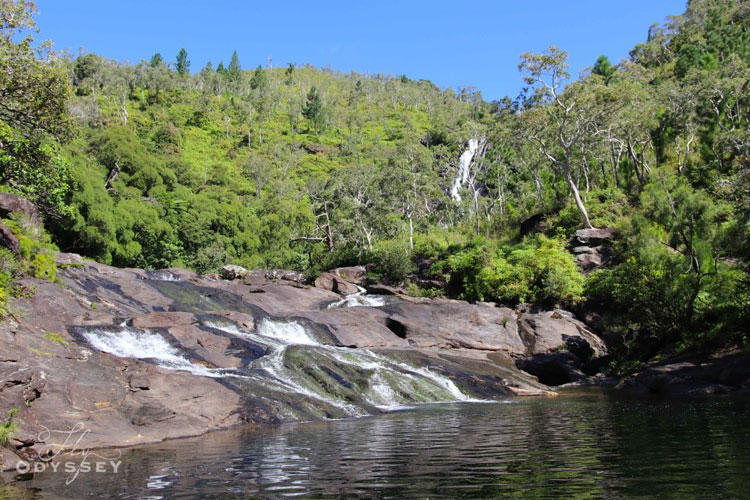 Arriving at the Tieti Hotel just outside of Poindimie, we checked into a beachfront villa and spent the afternoon relaxing on the beach after the long drive and prepared for a day of Suba Diving which we had planned for the following morning. 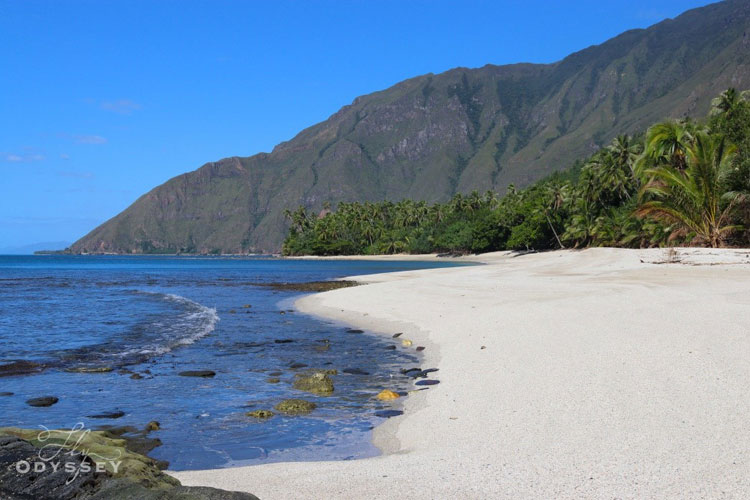 Waking to sunny skies, we headed out with Tieti Diving out on the magnificent coral reefs located nearby which we had heard all about. With impressive caves, canyon systems and one of the most biologically diverse known coral reef systems in the world, it certainly didn’t disappoint.

They were some of the most amazing hard, soft and fan corals we have ever seen, and a very professionally run diving operation that will definitely feature again in our plans when we return! 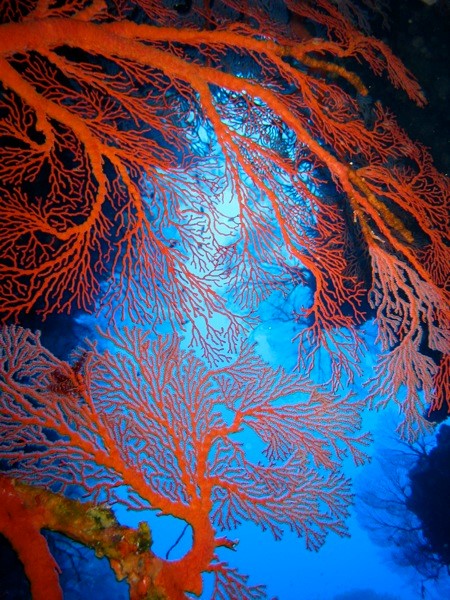 With its easy proximity to Australia and abundance of attractions throughout, New Caledonia is certainly an ideal option for couples, families and small groups keen to combine a range of outdoor activities while immersing in French and Melanesian cultures.

And with the sensational trophy saltwater Fly-fishing and accommodation options on offer it will ensure our clients will continue to travel here for years to come.